A tale of an orange obsession….

So I won’t lie – one of my ‘grail pens’ was the Delta Dolce Vita. From the firs time I got my grubby paws on a Fountain Pen Hospital catalog, I fell in love with that radiant orange, and the contrast with it and the black and silver cap & trim. From there began a quest for orange pens, since I could not afford a Delta. (Still really can’t afford the one I’d love, but there’s a lot of pens like that….)

Funny thing is, turns out that orange, black, and silver look is pretty easy to find. Below are (and I”m not telling you the order they’re in!) A Delta Dolce Vita, a Conklin ‘Orange Nights,’ a custom-made Atelier Lusso with sterling fittings, and a no-name Chinese (I’m assuming) pen that came to me in a batch lot, but I’m guessing could not have cost more than $10.00. Can you tell which it which? 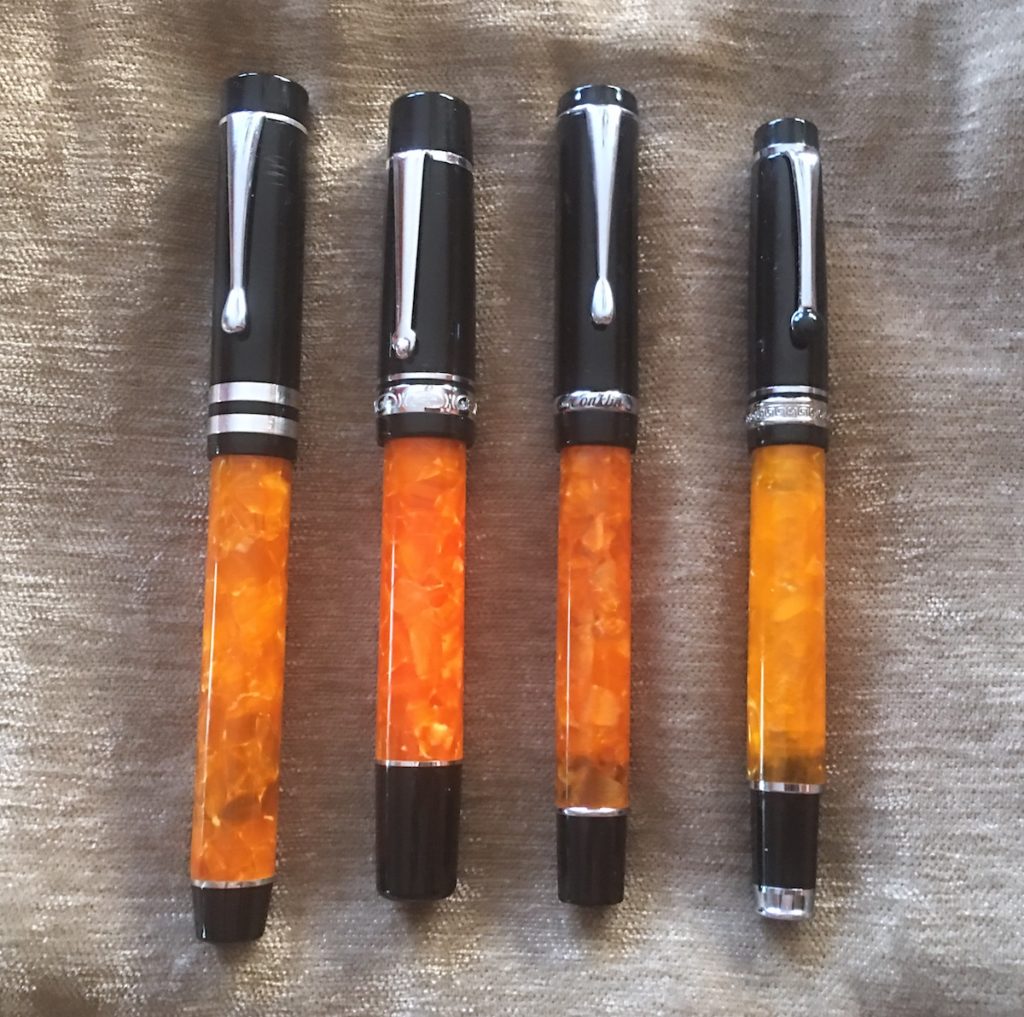 Finally! I have finished the conversion for the site from straight HTML to a data-base driven site. I’m still adding the last few pens (mostly my modern Sheaffer pens), but otherwise it’s up and running.

I’ve also added 45 new inks, including 6 of Diamine’s ‘Shimmer’ inks, and all five of the current J. Herbin 1670 shimmering inks. I have learned that shimmer inks are ridiculously hard to photograph in a way that does them justice, but I put my usual swab together with a more angled swatch to catch the light. Hopefully you’ll get the idea. At right is one of my attempts to capture the beauty of what remains on of my all time favorite inks, Herbin’s 1670 Rouge Hematite.

Also new: three inks by L`artisan Pastellier Callifolio, a relatively new brand that makes some lovely colors. I’ve also got two inks by Tekker, the sadly now-defunct company that let you design your own colors. Started by a couple of college students, they ended up getting overwhelmed by the response, and were unable to keep up. No word yet if someone has picked up on this, but I”d love to see the concept back in business!

Look for more updates to the Modern Sheaffer page, and then several dozen (close to a hundred) new pen listings, vintage and modern, including a couple custom pieces, a few low-price Japanese & Chinese pens and more!

I know it’s been over a year since I updated this. In part, it’s because Ive been working hard on developing a database to run the pen indexing part of the site. The blog part works beautifully, but adding every new pen by hand not only got unwieldy to do, it made for page that took way too long to load. So that’s been in progress. Ideally, I hope to offer more ways of viewing the pens you’re interested in, such as brand, nib, filler, date range, maybe even by color. But there are very few non-commercial packages to do this, so learning to construct it has been quite a battle. I think I’ve got the hang of it now, so look for things to start going live soon. At this point, it is mostly the (monumental) task of manually re-entering the info for each and every pen I own. Yikes! (There aren’t really any free tools for doing that either, I’ve looked!). So far it’s looking pretty good though! You can see what the new database driven pages will look like on the bottom left, where there are a few pages labeled (BETA).

Once it’s done, I will be adding a LOT of new pens and inks, several repair updates, and maybe even a page for all the vintage pencils I have also accumulated. So stay tuned!